At the 26th NEM General Assembly, Fernández presented a public session entitled ‘Towards a New European Media Partnership‘, in which he urged European stakeholders “to align public and private interests in order to stand out in the race for the immersive and interactive technology market”. After pointing out that most hardware and software providers are American, he called for a European partnership and highlighted the need for strong investment, “if Europe does not want to remain a mere user”. Fernández also moderated the plenary session on immersive applications and future media networks, while Mario Montagud took part in a roundtable on participatory, inclusive and accessible media. 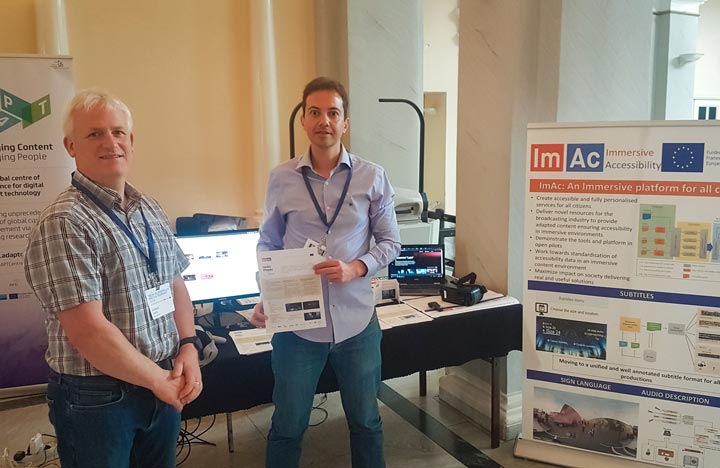 Attendees had also the opportunity to experience first-hand the capabilities of two projects led by i2CAT’s Media Internet area. VR-Together partner TNO showcased a demo that enabled visitors to try the photo-realistic social virtual reality experience currently developed by the project’s consortium. The immersive experience aroused very positive feedback from attendees and the organization, being eventually recognized with NEM’s Best Exhibition Award. Meanwhile, ImAc hosted a booth where visitors could enjoy demos and get the latest information on accessibility services in immersive 360 media environments. ImAc was also presented as part of the Media Accessibility Cluster.

Forty lectures and presentations, five keynotes, several introductory presentations and eight roundtables by prominent European experts and scientists rounded out the Summit’s programme, providing valuable opportunities for the exchange of ideas and knowledge. Organized since 2008 by the NEM Initiative, the international conference and exhibition has grown to become an annual not-to-be-missed event, providing attendees with a key opportunity to meet and network with prominent stakeholders, access up-to-date information, discover latest technology and market trends, identify research and business opportunities, and find partners for upcoming EU-funded calls for projects. The next edition will take place in Dublin, Ireland, in May 2020.

By continuing to use the site, you agree to the use of cookies. More information